skip to main | skip to sidebar

Literary Inspiration for A Traveller in Wines

"Here," cried Don Quixote, "here, brother Sancho Panza, we shall be able to dip our hands up to the elbows, in what is called adventure. . ." – Don Quixote, Miguel de Cervantes


"People talk of the glorious dreams of opium-smokers, the frenzied exhilaration that hashish can give, but I, who have studied both, assure you that neither can for a moment compare with the delirious joy of fifty or sixty Spaniards applauding a dancer in the upper room of a café in Seville!" – From Paris to Cádiz, Alexandre Dumas pere


"Of one thing the reader may be assured, – that dear will be to him, as is now to us, the remembrance of those wild and weary rides through tawny Spain. . ." – Gatherings From Spain, Richard Ford.


"The traveller in wines, finding these topics a little beyond his comprehension, remarked loudly that Sénécal was forgetting a lot of scandals." – Sentimental Education, Gustave Flaubert, whose work was greatly influenced by Cervantes's Don Quixote. 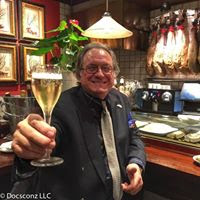 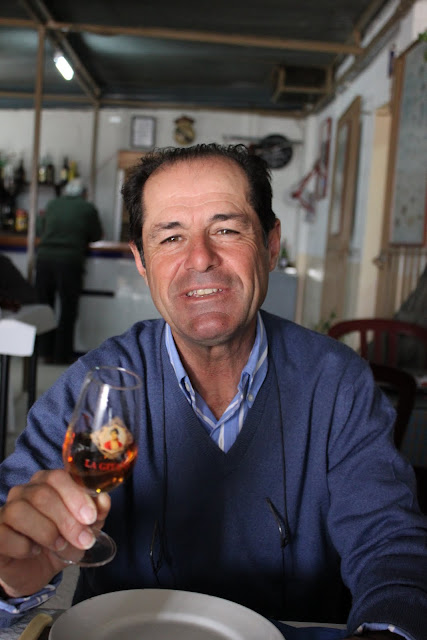 To Javier Hidalgo, La Gitana Manzanilla and the incredible experience we had with Javier and his wife Paula at Riacheros out in the mashes of Las Marimas, north of my favorite Spanish town, Sanlúcar de Barrameda, the place where God was born.

All photos and text by Gerry Dawes©2019.
Contact gerrydawes@aol.com for publication rights. 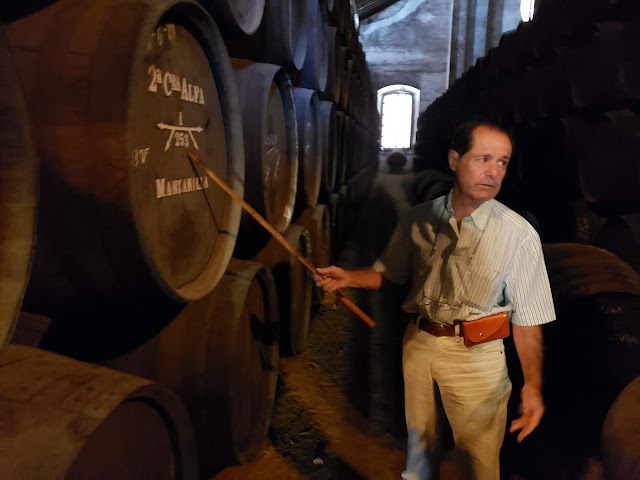 Javier Hidalgo telling Michael Whiteman and Rozanne Gold the intricacies of the Sherry solera system at Bodegas La Gitana.  The bodega was closed for a local holiday, but Javier took us on a private tour. 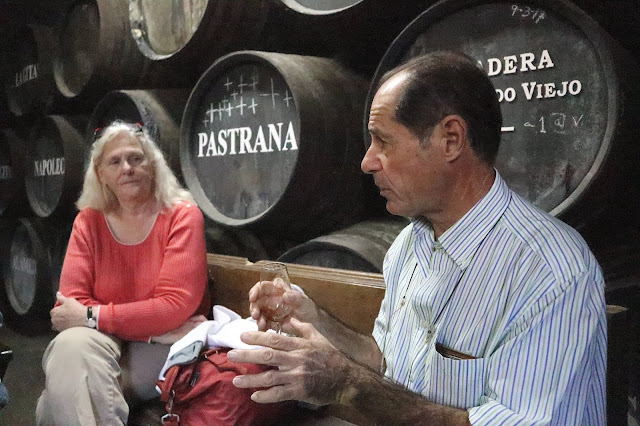 Kay, who only likes the sweeter types of Sherry, listens to Javier explain his wines. 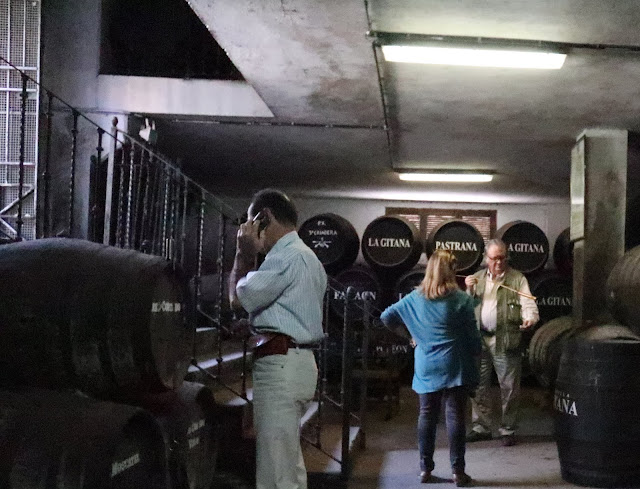 While Javier was on the telephone, his wife Paula wanted a glass of Sherry, so I took Javier's caña (made from a cane) venencia (wine "thief") for extracting Sherry samples from a cask.  I learned out to use a venencia back in the 1980s by repeatedly practicing using water from a swimming pool instead of wine. 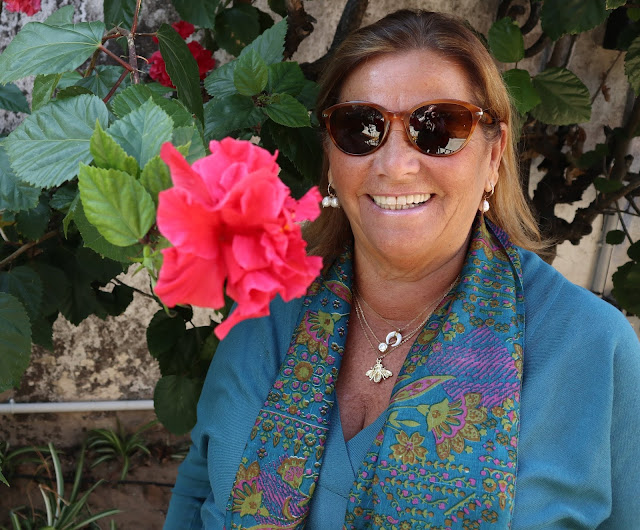 Paula de La Infiesta loves flowers and asked me to photograph her by this one growing in the patio of Bodegas La Gitana. 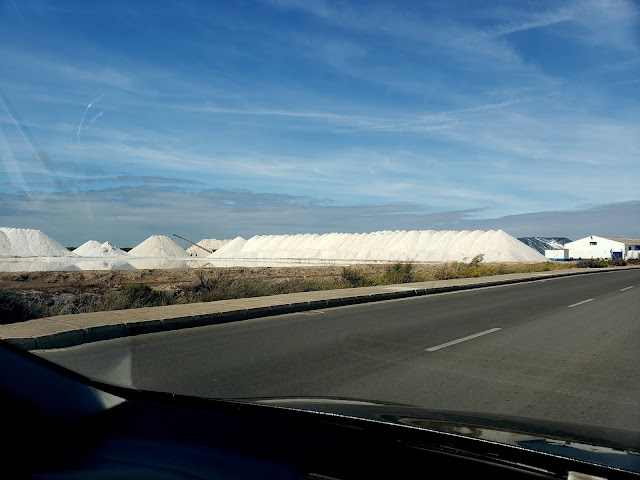 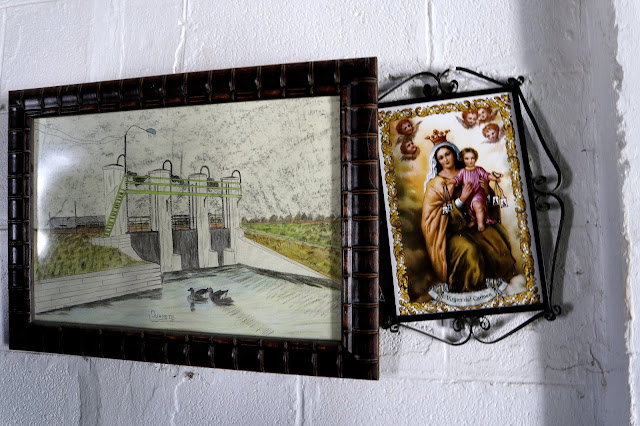 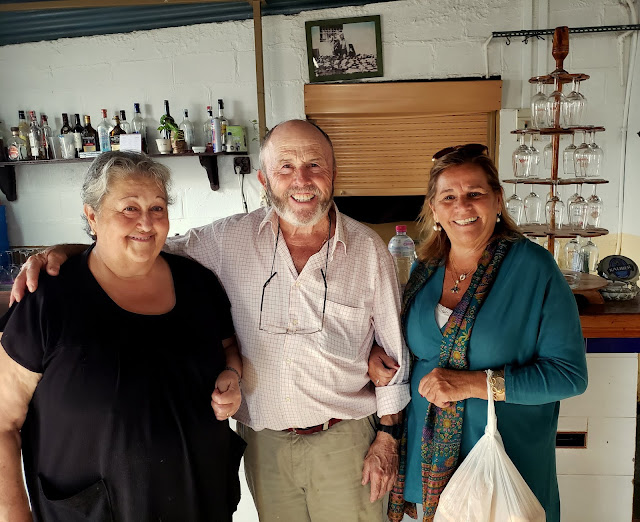 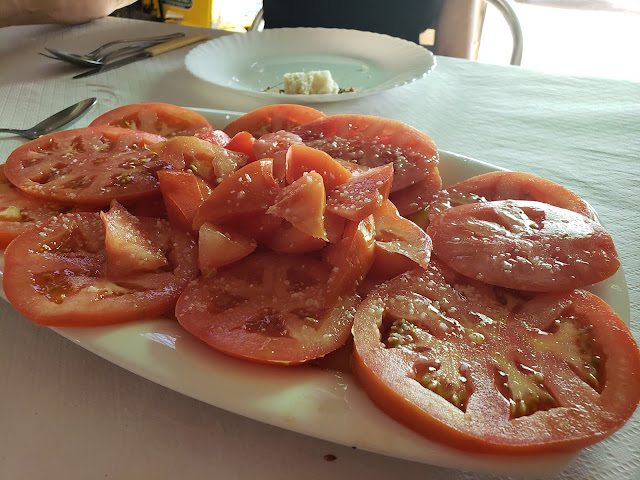 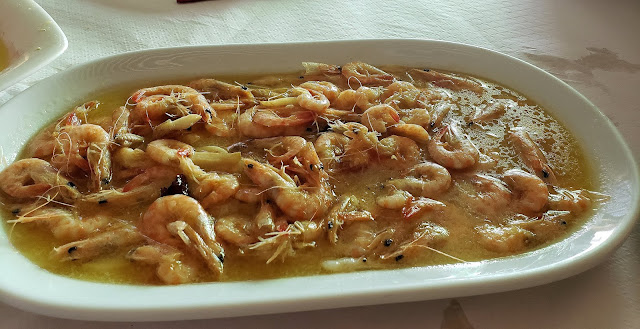 Camarones, small estuary shrimp that can be eaten whole, heads, shell and all. 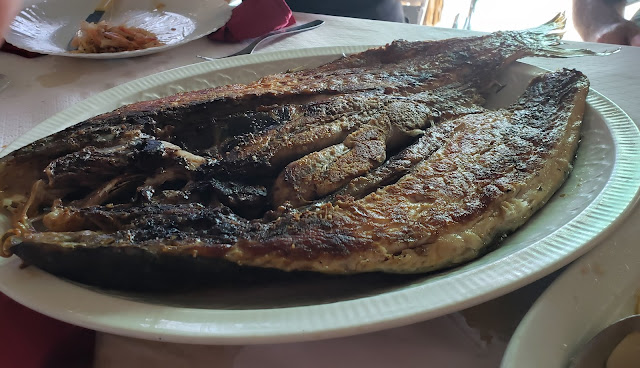 Whole plancha-grilled albor (grey mullet)--with the hueva (fish roe) in the center and reminiscent of shad roe--that Javier advised us should only be ordered here, because it is good when fished from plankton- and camarones-rich brackish salt waters of La Marisma, but is not a good fish when caught in the ocean. 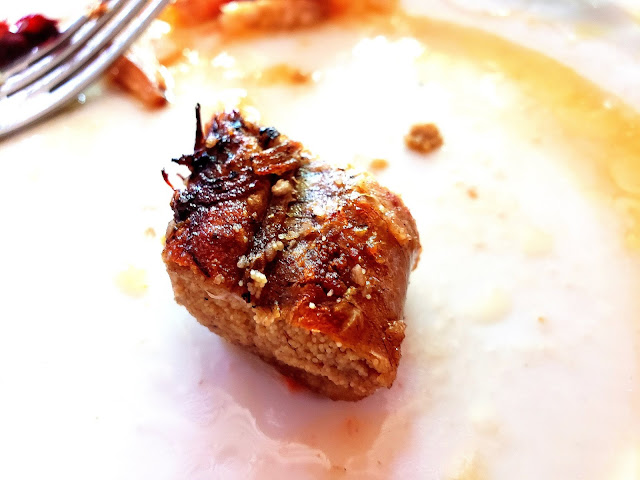 Albor (grey mullet) hueva (fish roe), reminiscent of shad roe and as good as any shad roe I have had. 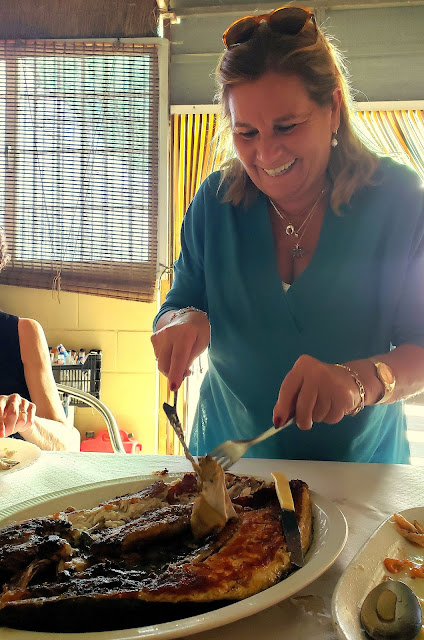 
In early April 2012, after stays during Holy Week in Sevilla and Ronda, I took my spousal equivalent, Kay Balun, with me to Sanlúcar de Barrameda (See Sanlúcar Sunset in a Manzanilla Glass) to spend a couple of days with a long-time friend Javier Hidalgo, producer of Bodegas Hidalgo La Gitana Manzanilla de Sanlúcar, and his wife, Paula de La Infiesta, at their finca, the charming, bucolic farm where they live between Sanlúcar and Chipiona.

Javier Hidalgo drinking his Bodegas Hidalgo Napoleon Amontillado as an aperitif before our riacheros lunch at Las Compuertas out in the La Marisma marshes north of Sanlúcar.


In just two days, we managed a number of wonderful adventures, including a foray into Las Marismas, the famous wetlands and bird sanctuary north of Sanlúcar (and west across the Río Guadalquíver), where Javier and Paula took us to have lunch at a riacheros (river fishermen) bar-restaurant located in a place in La Marisma, so isolated and secret that I am not going to tell you the name (Whoops, I did mention the name already!)

In deference to Kay, Javier spoke to us in his fluent, British-nuanced English. "My father spoke French and English, so I began to learn English at home. but I was taught French at school," he explained. "But by the time I went to university, I realised that English was going to be useful, so I started to study it. My parents' home was very international with many foreign visitors related to the wine and bird worlds, so I had many chances to practice English. During my military service at Rota Naval Station, I worked as an interpreter and then I further refined my English on frequent visits and hunting trips to the UK which is our best market outside Spain." (I coincidentally first came to Spain to do the last two years of my military service at Rota, a major American Navy base, which is how I first came to know and love Sanlúcar de Barrameda.)

We couldn't have been with a better guide for Kay's first introduction to Las Marismas.  Javier grew up going on repeated birding and hunting excursions into what he refers to as La Marisma.  When I told him that I had always heard these wetlands called 'Las Marismas,' Javier, who published his memoirs of the area, "Recuerdos de La Marisma" (Ediciones Geribel, 2005), clarified the term for me. "Both ways are correct. There are many marismas in the world but for me this is the most important one, that is why I refer to it as “La Marisma.” You can use either. 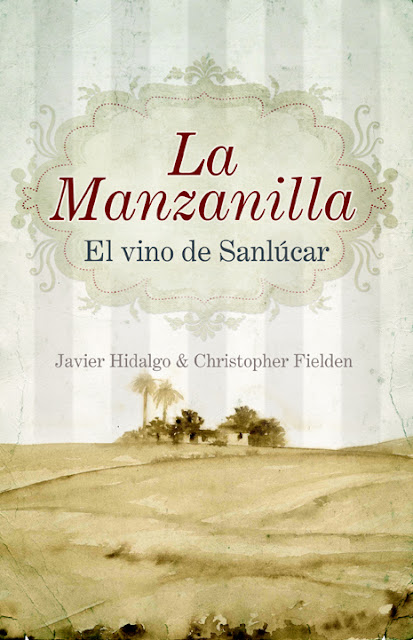 As we bounced over a track that had been filled with stones that were bone-jarring, even in Javier's four-by-four, he told us, "The restaurant we are going to is nothing fancy. In fact, the place is bit raffish, but the food is quite good."

"Sounds like my kind of place," I replied, (If you do find out where this place is, you should rent a half-track or a tank to get there; the road is that rough.)
This art of La Marisma wetlands is not quite the same as the bayous of Louisiana, but La Marisma and Coto Doñana, the legendary bird sanctuary and major eco-system on the west bank of Río Guadalquíver have some similarities. 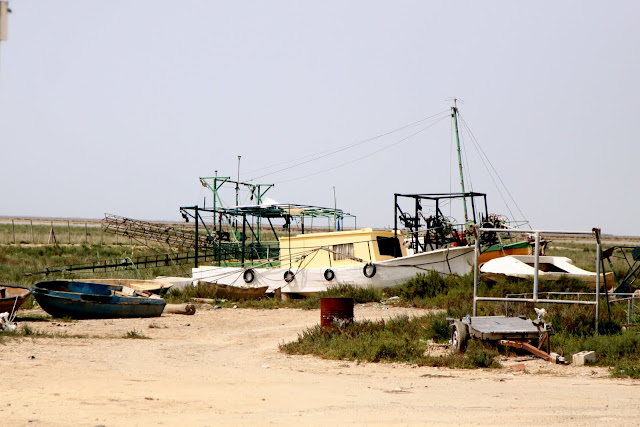 
At the restaurant, Javier started me off with a copita of the finely nuanced, beautifully made Hidalgo Napoleon, one of the very best Amontillados made, while Paula poured Kay a copita of La Gitana Manzanilla, a delicious, dry, crisp, lovely sherry that is a great accompaniment to seafood. All of us would continue drinking La Gitana throughout the meal. 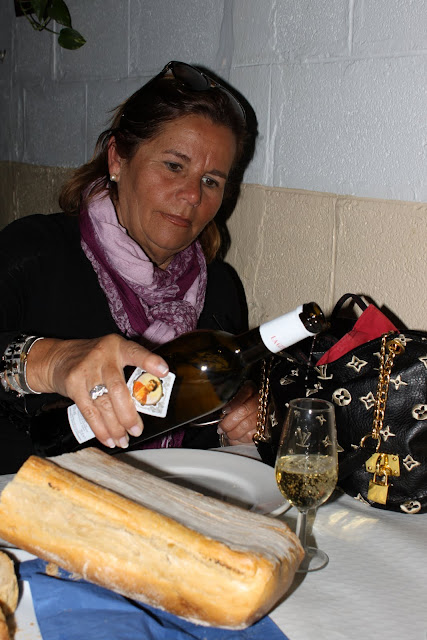 Juan Manuel, the owner of this hidden riacheros bar, served us a lunch of that began with a loaf of freshly baked country bread, then a platter of same-day camarones (tiny shrimp), which can be eaten whole (and are used to make one of the great folk dishes of Andalucía, tortillitas de camarones, a tiny shrimp-filled fritter that we would have the following day at Bar Barbiana on the Plaza del Cabildo in Sanlúcar). 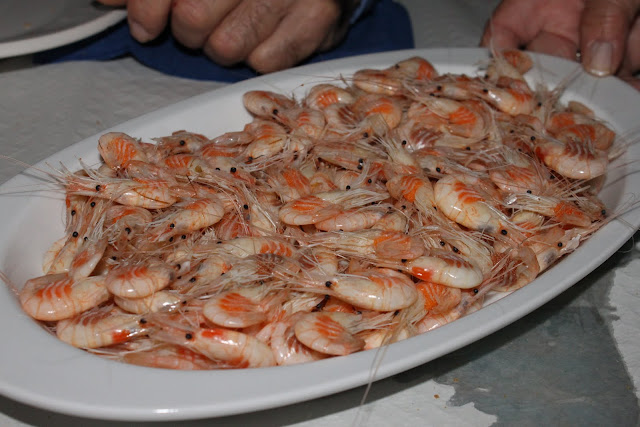 Camarones, small La Marisma shrimp, at the bar-restaurant that caters
to the riacheros, the men who fish the waters of La Marisma.

Next Juan Manuel brought out a large, beautifully browned, whole calamar (squid), which Paula cut up into smaller pieces, then we had a fish dish, a whole grilled albor (grey mullet) that Javier advised us should only be ordered here, because it is good when fished from plankton- and camarones-rich, brackish salt waters of La Marisma, but is not a good fish when caught in the ocean. All of this was accompanied with La Gitana Manzanilla, which we kept cold in a table side ice bucket. 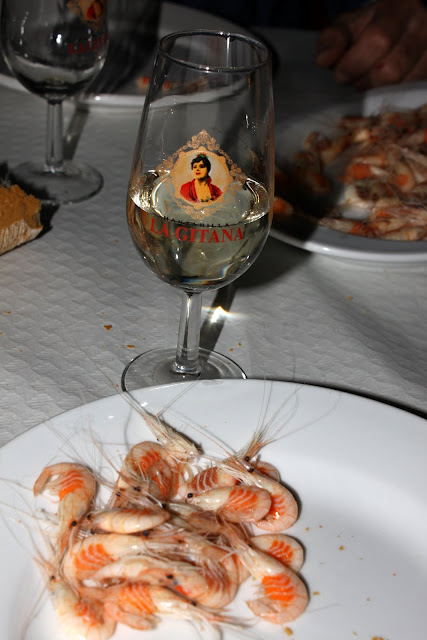 Camarones, tiny shrimp caught in Las Marismas shrimp and La Gitana Manzanilla sherry at the bar-restaurant that caters to the riacheros, the men who fish the waters of La Marisma.

Besides the rugged, bouncy trip in a four-by-four over one of the roughest roads I have been on in years in Andalucía to get to the restaurant, Javier Hidaldo, a well-known bird expert as well as a Manzanilla bodeguero, brought us back on a rough dirt track through marshes where we saw large flocks of flamingos, slender-billed gaviotas (sea gulls), ducks, geese and other water birds; passed through herds of grazing cattle and saw Marisma cowboys on horseback herding cattle; and saw the amazing Marisma's cattle that graze on aqua-plants up to their bellies in salt water. 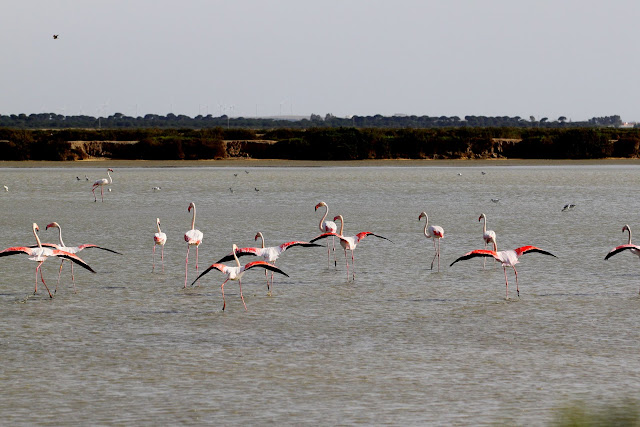 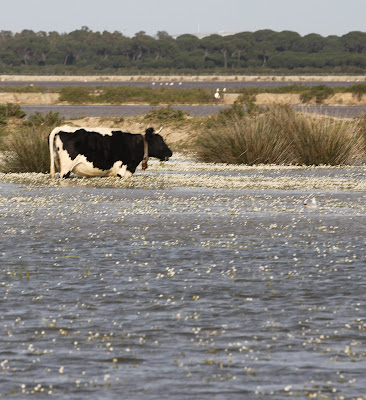 Cattle grazing on aqua-plants in the water in La Marisma.

The bird show continued back at Javier’s and Paula’s finca south of Sanlúcar, where Javier keeps ducks, geese, turkeys, Guinea hens, chickens including fiesty bantam roosters and a peacock that likes to fly up to the highest point of the homestead and shriek, often in the middle of the night, as peacocks are wont to do (see my article on
Valladolid with photos of the semi-wild peacocks of the Campo Grande park in the center of town). 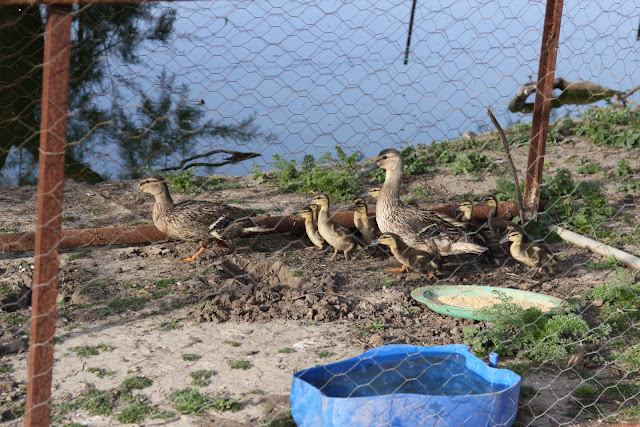 Ducks and ducklings at the Hidalgo finca outside Sanlúcar de Barrameda.

Javier Hidalgo loves animals and also keep three horses, which he exercises on local beaches and, during the spectacular annual thoroughbred races on Bajo de Guía beach each August in Sanlúcar, Javier, who maintains, still in his fifties, jockey weight, races his thoroughbred against much younger competition and has won a number of races. 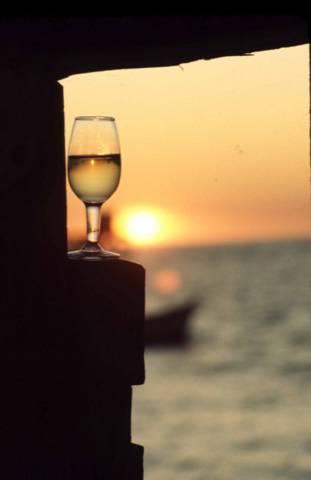 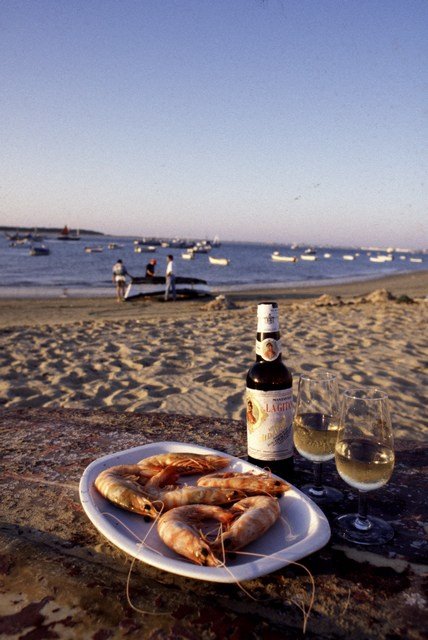 Other Articles of interest on Sherry:


Sherry’s Image Gets a Makeover 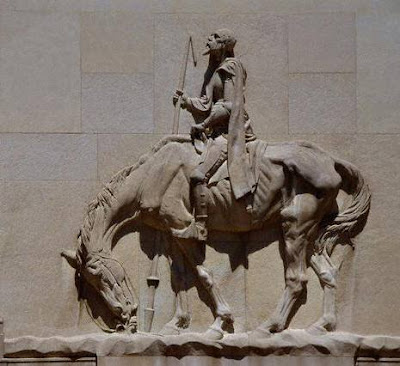 Poem by Archer M. Huntington inscribed under the Don Quixote on his horse Rocinante bas-relief sculpture by his wife, Anna Vaughn Hyatt Huntington, in the courtyard of the Hispanic Society of America’s incredible museum at 613 W. 155th Street, New York City. 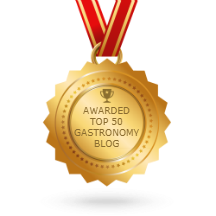 "The Best Gastronomy blogs selected from thousands of Food blogs, Culture blogs and Food Science blogs in our index using search and social metrics. We’ve carefully selected these websites because they are actively working to educate, inspire, and empower their readers with frequent updates and high-quality information." 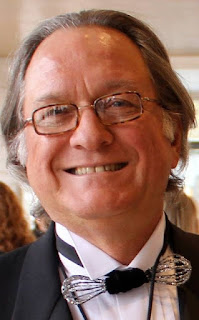 Until last year Gerry was the Producer and host of Gerry Dawes & Friends Pawling Public Radio in Pawling, New York (streaming live and archived at www.pawlingpublicradio.org and at www.beatofthevalley.com.)

Dawes was awarded Spain's prestigious Premio Nacional de Gastronomía (National Gastronomy Award) in 2003. He writes and speaks frequently on Spanish wine and gastronomy and leads gastronomy, wine and cultural tours to Spain. He was a finalist for the 2001 James Beard Foundation's Journalism Award for Best Magazine Writing on Wine, won The Cava Institute's First Prize for Journalism for his article on cava in 2004, was awarded the CineGourLand “Cinéfilos y Gourmets” (Cinephiles & Gourmets) prize in 2009 in Getxo (Vizcaya) and received the 2009 Association of Food Journalists Second Prize for Best Food Feature in a Magazine for his Food Arts article, a retrospective piece about Catalan star chef, Ferran Adrià.

In December, 2009, Dawes was awarded the Food Arts Silver Spoon Award in a profile written by José Andrés.

". . .That we were the first to introduce American readers to Ferran Adrià in 1997 and have ever since continued to bring you a blow-by-blow narrative of Spain's riveting ferment is chiefly due to our Spanish correspondent, Gerry "Mr. Spain" Dawes, the messianic wine and food journalist raised in Southern Illinois and possessor of a self-accumulated doctorate in the Spanish table. Gerry once again brings us up to the very minute. . ." - - Michael & Ariane Batterberry, Editor-in-Chief/Publisher and Founding Editor/Publisher, Food Arts, October 2009.

Pilot for a reality television series on wine, gastronomy, culture and travel in Spain.

Gerry Dawes can be reached at gerrydawes@aol.com; Alternate e-mail (use only if your e-mail to AOL is rejected): gerrydawes@gmail.com
Posted by Gerry Dawes's Spain at 6:47 AM

A Traveller in Wines 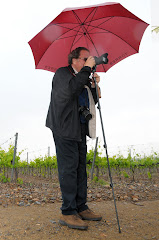